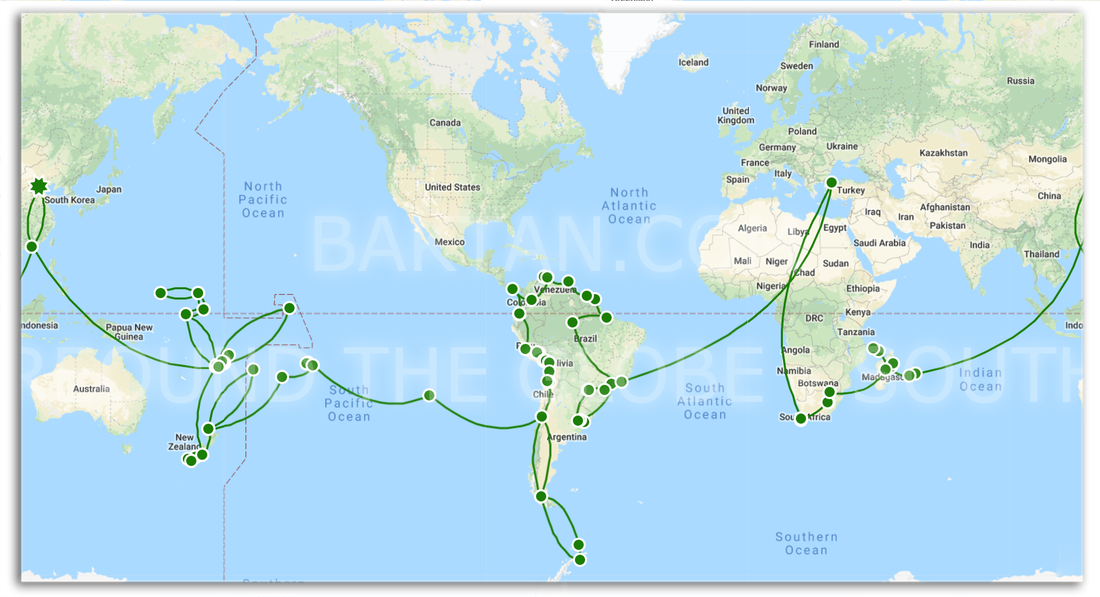 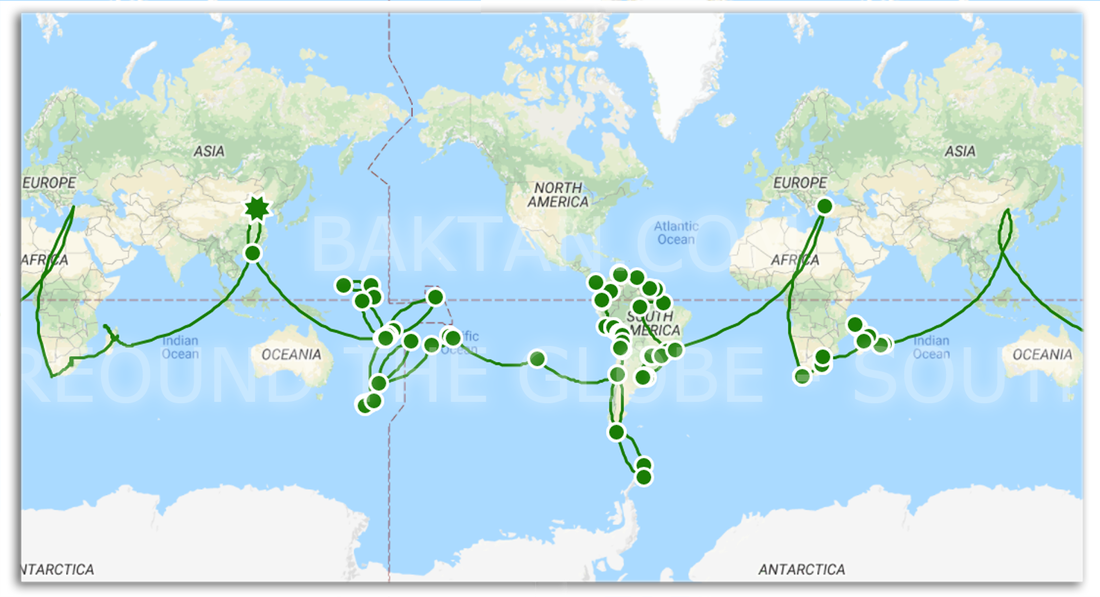 As you can see, the itinerary is a round-the-globe one almost in the south of the earth which makes a circle - one way only without turning back, it makes a shape of Phonix heading south with its head in Antarctica and wings over Mozambique channel and the Pacific ocean.
Thus, I call it the 'Southern-Cross Phoenix' of which I am pround. It has been a treasure which will stay in my memory in my whole life because it has been unique, challenging, fantastique, exotic and advanturous.
To talk about this trip, first I would like to list up countries/regions visited in time order:
- Beijing1
- Hongkong1
- Mauritius*
- Reunion*
- Mayotte*
- Comores*
- Madagascar*
- Lesotho*
- South Africa*
- Turkey
- Argentina*
- Uruguay*
- Paraguay*
- Brasil*
- French Guyana*
- Suriname*
- Trinidad&Tobago*
- Curacao1*
- Bonaire*
- Aruba*
- Curacao2
- Columbia*
- Panama*
- Ecuador*
- Peru*
- Bolivia*
- Chile1*
- Antarctica*
- Chile2
- Chilean Polynesia*
- French Polynesia*
- Cook Islands*
- New Zealand1
- Niue*
- New Zealand2
- Fiji1
- Wallis Futuna*
- Fiji2
- Kiribati1*
- Fiji3
- Nauru*
- Kiribati2
- Marshall Islands1
- Micronesia
- Marshall Islands2
- Kiribati3
- Nauru2
- Fiji4
- Hongkong2
- Beijing2
Some comments:
- 29 New countries/regions visited (marked*)
- Completed the whole LATAM expect Guyana and Venezuela
- Most countries/Regions in the south except the northern part of LATAM, Turkey, HK, Kiribati, Marshall Islands and Micronesia
- First time using HK as long-leg transit point
- Made it to Antarctica - Being in Antarctica is not a high light, but having been there is.
- Coincidentally landing one day before the biggest festival of Easter Island - Tapati which has been a great experience
- First time using Fiji as regional flight hub, transiting 5 times
- First time visiting Fiji seriously after so many transits
- Having proved that it is survivable to speak European Portuguese in LATAM
- Second time in French Polynesia, still not having made a serious visit
- Had my longest flight from Istanbul to Buenos Aires 16.5h
- Had my longest connection flight Captown-Istanbul 10.5 and Istanbul-Buenos Aires 16.5
- Had the most flight changes either delayed or advanced, 3 advanced flights being Antananarivo-SteMarie 2.5h; Queenstown-Nadi 24h; Labasa-Suva24h
- Had the most expensive flight I have ever had - Hanga Roa to Tahiti
- Did the second Pacific Island hopping Nadi-Pohnpei
- Couchsurfed the least
- Met 2 former CS hosts mine coincidentally - Kostas (Crete) met in Panama city; Sharan Ram (Suva) in Nausori
- Worst experience of the trip - Wallis Futuna
- Countries/Regions during this trip, to which I wish to and will go back (not as transit) : Columbia, Ecuador, Peru, French Polynesia, Fiji
- The most expensive part of the trip: Antarctica
- The most cost-effective part: Fiji
- Favorite city of the trip: Cusco
- Favorite land crossing: Bus ride Cusco-Puno-Titicaca-LaPaz
- Favorite flight: Nadi-Taveuni with small jet
- Favorite CSer: all of them
- Favorite Hotel: Hilton Double tree Fiji
- Most used application on the trip: Uber
- Personal high light: Iguacu waterfall, Cusco, Machupicchu, Uros, Salar de Uyuni, Tapati Rapa Nui, 2nd Pacific Island Hopping
- Never had so many rainy days before
- Successfully escaped from cyclone Gita's landing in New Zealand
For those who are interested in my Antarctica trip:
plz google the Norwegian ferry company: Hurtigruten. The one I took was a 10 day trip with departure from Punta Arenas. A packet with a bed in a shared cabin (for 2persons) with sea view plus chartered flight ticket santiago-punta arenas and a night in Sheraton Santiago should be around 5000usd.
Many thanks to the following friends who helped me during this trip in different ways:
1. see Album contributors on FB
2. and those who are not on FB
So far my country/region list is 155. Cannot wait for the next trip!